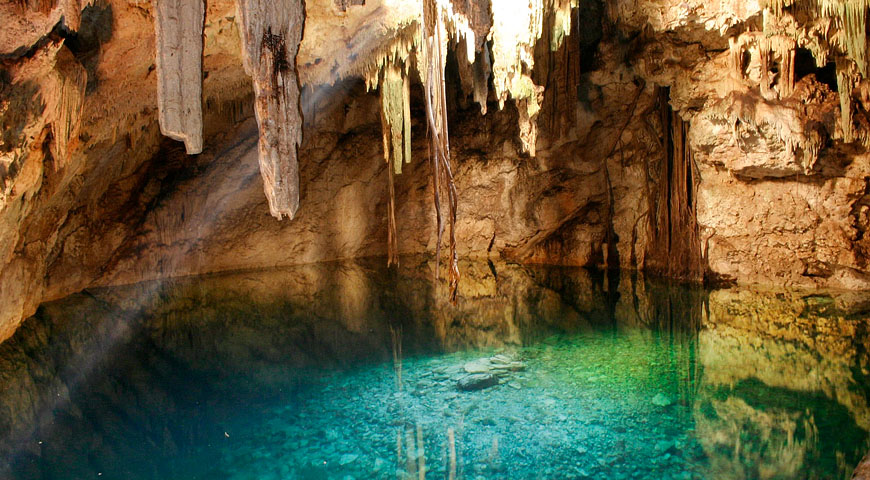 A journey in a mine cart to three underground cenotes

Cuzamá has become famous due to a very peculiar trip, one that takes you to three underground cenotes (natural sinkholes) on a mine cart pulled by horses. The town of Cuzamá is located approximately 40 kilometres from the city of Mérida, in the same direction as the town of Acanceh. In Cuzamá you will be welcomed by a group of local workers who have organized themselves into what they call “Cooperatives”. They offer very peculiar trips in modified mine carts which they call “trucks”, to the three underground cenotes. In the past, these “trucks” were used to transport the henequen plant through narrow lanes, but now they have been modified into vehicles that accommodate up to four passengers. They are pulled by horses or mules over rail tracks along 7 kilometres of jungle to the cenotes of Chelentún, Chak-Zinik- Ché and Bolom- Chojol.

There are three stops or “paradores turísticos” along this journey, and you can start your journey from any of these points: X’Tojil, Hacienda Chunkanán and 3 cenotes. Fare prices vary between $350 and $400 Mexican pesos and it is advisable to plan your visit in advance as the last “truck” journey is scheduled at 15:30pm. The duration of this trip is approximately three hours. This includes two tour guides and admission fees to the three cenotes, with 30 minutes of recreation time at each of them, before continuing the journey.

To many, this is the cenote with the easiest access to the general public. Both scuba diving instructors and experts on caving exploration consider it one of the best places to practice these activities, due to the fact that the cenote is inside a cavern.

The access from the surface to the cenote is via a rustic stairway that descends approximately 20 metres. The natural pool in the cenote is a light blue mirror that offers crystal clear waters with a visibility of around 50 metres, a depth of 18 metres and a temperature of about 26 degrees Celsius.
At the bottom of the cavern to right hand side of the cenote there are two more caves that have depths of 30 metres and 100 metres. Because of its difficult access due to their narrow pathways, we recommend only experienced explorers with appropriate equipment should venture down these two caves.

Chak-Zinik- Ché is the second cenote on this journey and you will be able to descend to it via a set of wooden steps to its natural waterhole, coloured bright indigo. The pool is ample enough to swim around in and you will be able to admire a chamber with stalactites hanging from above that reveal the stage of formation of this cenote. Geologist indicate that in time, the chamber will give way transforming the cavern into a fully formed “open to the sky” cenote.

Chak-Zinik - Ché is 40 metres deep and also contains internal caves with depths over 70 metres, it maintains a regular temperature of 27 degrees Celsius and a visibility of 50 metres. This cenote is perfect if you wish to practice scuba diving through its underwater caves.

To access the third and final cenote on this journey you will need to descend 15 metres over very steep wooden steps, but when you reach the bottom of the cave and discover the underground pool with its tints of turquoise blue mixed with emerald green colours, you will know that is was worth the effort. From the bottom of the cenote, you can admire beams of sunlight filtering through tiny holes in the cave’s walls which create a continuous changing colour effect on the water of the pool and gives a magical atmosphere to the entire chamber. The temperature of the water also reaches 27 degrees Celsius. The cave is approximately 35 metres in diameter and 27 metres in depth, but to the sides of cavern there are narrow caves that can reach a depth of up to 40 metres.

Explorers of cenotes throughout the Yucatán peninsula believe that this is without a doubt one of the most beautiful cenotes in the entire Mexican state of Yucatán.