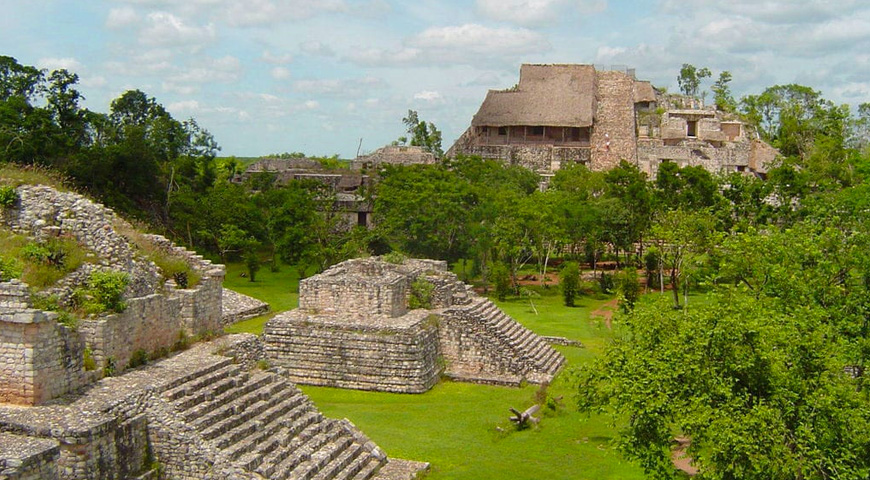 Situated in the mid-east area of the Mexican state of Yucatán, 190 km away from the city of Mérida and only 2km away from the town that gives this place it’s name, we find the archaeological site known as “Ek Balam”, which in the Mayan language can be interpreted as “Black jaguar” or “Jaguar star”.

We find the remains of this Pre-Hispanic site standing over two main squares (plazas), one facing north the other facing south, both surrounded by two concentric fortress walls. There is one more fortified wall in the interior of the city that, according to expert archaeologists, was reserved for the nobles who inhabited this place. These defensive walls are the starting point of five ancient roads, “Sacbés or sak be’oobse” in the Maya language.

Experts estimate that the city of Ek Balam reached its highest splendour during the “Late classical” period (600-900 A.D.) and that it was the capital of the “Tlalol Kingdom”. For this reason, is believed to be one of the richest cities in the area.

What makes Ek Balam special?
The varied archaeological remains of the city of Ek Balam make it a destination that should not be missed, especially by those visitors who wish to immerse themselves deeper into Mayan culture. We recommend you stop and discover at least these three places listed below, inside this archaeological site.

1. The Acrópolis. The Acrópolis was constructed in different stages by layering a new building on top of the previous edification. Its remains still display living quarters in the shape of chambers that were distributed in different levels of the edification and which are connected through a very sophisticated system of steps and corridors. Its dimensions are approximately 160 metres in length, 60 metres wide and 31 metres in height.

2. The Oval Palace. This building is located in the south square (plaza) and was constructed in three different stages. In the first stage we find ten rooms built in an oval shape. The second stage is distinguished by two main halls on the top floor. On the third stage, you can appreciate a small temple that crowns the structure. It has been established that this palace was exclusively used by the elite, due to findings in its interior. These include jewellery, burial offerings and other personal and decorative ornaments used mainly by government officials and nobles.

3. The Ball Game. Between the north and south squares, we find two walls that form the main “Ballcourt”. In these walls, different artefacts have been found which represent the ball game that was practiced in this city. They include: small balls made of burned stone, around 90 pots, various fragments of chambers with paintings representing the deity “K’awiil” or “God of Thunder” and also an arm shield made of decoratively carved limestone.

If you decide to visit this fantastic archaeological site, we recommend you stop to admire other structures such as, The chapel, the platform of the stelas and the Mayan Arch.

Tours Elite offers attractive and varied tour options around the most interesting areas of beautiful Chichen Itza. Whether you depart from Cancun, Merida or the Riviera Maya, our tours can be tailored to your schedule and budget.