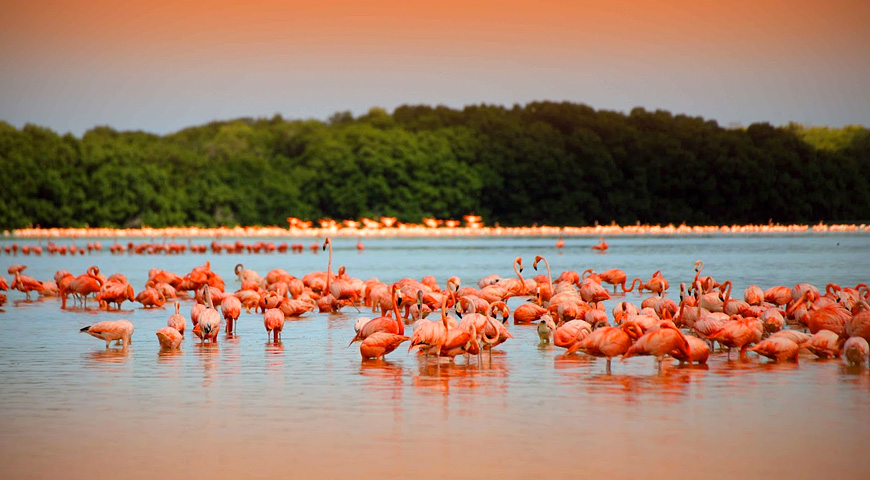 The landscape in pink

Thousands of flamingos resting over a salt lagoon paint the landscape with a bright pink colour that can only be believed by being there.

There is so much to discover around Mérida besides its fantastic archaeological remains and incredible cenotes (Natural sinkholes). To the north of the Yucatán peninsula approximately two hours from Merida city, we find “Ría Lagartos and Las Coloradas”, two places which thanks to its regular visitors (flamingos) and the natural properties of its waters, are painted in different shades of pink.

“Ría” is the name given to a large but shallow body of water coming from the sea (estuary). In this place, the sea water from the Gulf of Mexico joins the fresh water of the springs, mangroves and phreatic surface.
Ría Lagartos is a small fishing village located in the coastal region to the north of the city of Merida. Currently Merida is the capital of the Mexican state of Yucatan, one hour’s drive from the town of Tizimin and two and a half hours from Cancún.

What makes this small, tranquil and welcoming town special is a nature reserve that is home to approximately twenty thousand pink flamingos who come here to breed every year between the months of January and September. It is the largest gathering of flamingos in the whole of Mexico and, whether gliding over or resting on the shallow waters of Ría Lagartos, they create a spectacle that deserves to be admired for hours.

The warm waters of Ría Lagartos are also home to about 250 different species of birds and between the months of June and August, hundreds of sea turtles arrive to lay their eggs here. Finally, there is an important population of alligators (Lagartos in Spanish) that give this place it’s name. Because of its natural beauty, UNESCO has given Ría Lagartos the status of “World Heritage Site”. Because of its global ecological importance due to its indigenous flora and fauna, Ría Lagartos is also a “Natural Biosphere Reserve”.

The different ecosystems of the 335.75 Km2 in Ría Lagartos, offer all visitors peaceful and relaxed environments to observe mother nature. Equally, you can transform your visit into an adventure thanks to the area’s biodiversity that includes: jungle, rivers, sea, mangroves, salt lakes, natural sinkholes and freshwater springs, making “Ría Lagartos” a place like no other.

Close your eyes and imagine a coastline with soft, white sandy beaches covered by a horizon of a pink coloured sea. Can it be possible? Yes, you can witness it in “Las Coloradas”.

“Las Coloradas” is a small port and since pre-Hispanic times, the town has been dedicated to the industry and trade of salt. The salinity percentage in the waters of this coastal area is so high that it compares to that of the “Dead Sea”. For this reason, any swimmer would find floating here extremely easy.

Because of the high levels of salt, microorganisms and algae, the water turns into a translucent pink, and sometimes even red. Its beaches are made of fine white sand and in some areas the dunes are so white they appear to be mountains of snow.

In this community with a population of five hundred people, there are 7km of “salt ponds” and the salt is extracted using a process of evaporation that lasts for over six months. At the beginning of the process the salt ponds are green and maroon in colour, but towards the last months in the evaporation process, they become their characteristically pink colour. You can admire this spectacle twice a year between the months of March and July.

It is not prohibited to swim in these waters, but is important to be aware of the high levels of salt, which, combined with direct sun and heat, can cause skin irritation, especially after long periods of time in the water. If you do decide to swim here it is advisable to shower before and after. It is also important not to use suntan lotion of any kind as these waters are home to three different species of sea turtles that lay their eggs in these beaches.

In “Las Coloradas” you will be able to find a few restaurants, but visitors to this town won’t find any dedicated tourist infrastructure or accommodation. Nevertheless, “Las Coloradas” is located only ten-minutes drive from “Ría Lagartos” where you can find accommodation to match your budget.

Tours Elite offers attractive and varied tour options around the most interesting areas of beautiful Chichen Itza. Whether you depart from Cancun, Merida or the Riviera Maya, our tours can be tailored to your schedule and budget.